Seven Kalamazoo Public Schools student leaders were honored with Social Justice Youth Awards at the Kalamazoo City Commission meeting on Jan. 18. Students were honored for their achievement and leadership in racial and social justice.

The awards are presented annually as part of the city’s celebration of MLK Day. Winners exemplify Dr. Martin Luther King Jr.’s values through their volunteer work and community service.

The awards are presented by the program’s sponsors: Alpha Kappa Alpha Sorority, Consumers Energy, Fifth Third Bank, Kalamazoo Non-Violent Opponents of War, Life EMS, the Lodge-Dennis family, and Schupan & Sons. Additionally, one award this year was sponsored by the CSM Group and presented by Dr. Lewis Walker, a trailblazer for the progression of racial equity in Kalamazoo.

A recording of the awards presentation is available on the City of Kalamazoo’s YouTube Channel.

This year’s winners are:

Brooke Edwards is currently in the Top 10 of the Kalamazoo Central High School Class of 2023 with a 4.1 grade-point average. Edwards serves as a member of the KC Link Crew. As a Link Crew member, she mentors freshmen. She served as a youth advisor for the Youth Mobility Fund via KYDNET to help find solutions for youth who use bus transportation in Kalamazoo. She is also a member of the Greenleaf Trust Wealth Development Club.

Edwards has been involved in MLK Community-wide Celebration and Day of Service, has volunteered with ISAAC, (Interfaith Strategy for Advocacy and Action), and Residential Opportunities Incorporated, serving individuals with autism and developmental disabilities.

Her award was presented by Alpha Kappa Alpha Sorority.

He was nominated by Dr. Harold T. Swift of Jeter’s Leaders, who noted, “Cameron has been able to maintain being a standout athlete in soccer and basketball at Kalamazoo Central High School while still serving the greater Kalamazoo community.”

Moore’s ability to balance his personal interests and the interests which benefit his entire community demonstrate a maturity beyond his years, Swift said.

His award was presented by Fifth Third. 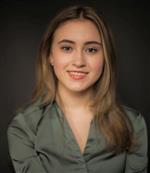 Justine Barnard, a Kalamazoo Central senior, has worked to increase voter participation by connecting drivers and voters to help them reach the polls on Election Day.

She was a finalist for the Telluride Association Sophomore Seminar in Black and ethnic studies. She applied for and was accepted to the Yiddish Book Center Great Jewish Books program, and this year she is studying abroad in Germany as a CongressBundestag Youth Exchange Scholar. Barnard demonstrates a respect for diverse backgrounds in her interactions with others.

She seeks out educational opportunities to learn more about diversity, such as researching cash bail’s impact on communities of color and participating in a community forum on local bond practices. In addition to these actions, Barnard has been a Youth Mobility Ambassador participant for the Youth Development Network, a childcare volunteer at the YWCA, and an intern on the Jon Hoadley for Congress campaign.

Her award was presented by Kalamazoo Non-Violent Opponents of War.

Brittany Wright, a Kalamazoo Central senior, is involved in the Merze Tate Explorers through which she has organized fundraisers that have provided more than $5,000 in scholarships for girls in Kalamazoo and Tanzania. In partnership with the Wotesawa Domestic Workers Organization, she helped three girls in Tanzania attend trade school, which will provide them with skills to open and run their own tailor and dress shops. As a member of the Merze Tate Explorers, she registered almost 200 children for a community Halloween party at The Crossroads mall.

Wright has learned about the poetry of African Americans and performed one of the works she studied for the State’s Poetry Out Loud competition. Realizing the importance of women of color in the world, she also wrote an article on the life of Western Michigan University graduate Dr. Merze Tate for Girls Can! Magazine. Tate’s life has inspired Wright to pursue a degree in nursing.

She was nominated for her award by Merze Tate Explorers Executive Director Sonya Hollins. Her award was presented by Life EMS.

Jackson Bergan is a member of the Loy Norrix High School National Honor Society and volunteers at the Kalamazoo Center for Youth and Community, where he serves those without homes. He created a GoFundMe to help the homeless population, and he volunteers with Inner City Youth for Change, through which he has completed numerous community service projects, including a fun day for students and food drives. He traveled to Sierra Leone with the group to complete several projects to help children in that country.

Jackson is also a student athlete leader at Loy Norrix. He has been the captain of the football team and also plays basketball, golf, and tennis. He is a leader at his church, Mt. Zion Baptist Church.

His award was presented by the Lodge-Dennis Family.

Jaydon Kelley is an active community youth ambassador, who documents social justice efforts through his photography. He is known for his poise and inclusivity and his work has championed community events such as the Black Lives Matter protests and marches and dinners honoring Women of Color.

The Loy Norrix junior is a member of the Loy Norrix High School DECA and Student Council as well as the Young Democrats Club. Kelley has worked closely with Stephanie Moore to ‘get out the Black vote’ in Kalamazoo with activities leading up to the November 2020 election. He has also participated in Planned Parenthood fundraising events.

His award was presented by Schupan & Sons.

Morgan Scott has almost a perfect 4.0 grade point average at Kalamazoo Central High School and has been involved in several community service efforts including:

She was nominated by Sadie Miles. Her award was presented by Dr. Lewis Walker and sponsored by the CSM Group.