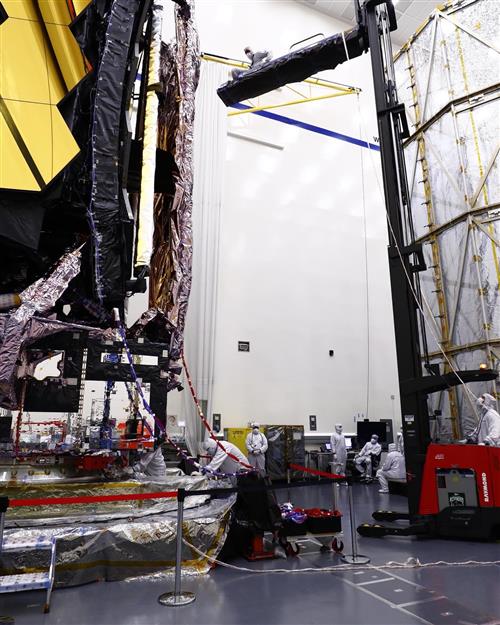 Kalamazoo Public Schools graduate Douglas Williams II can say that his work has literally gone where no person has gone before.

Williams, 27, a 2013 graduate of Kalamazoo Central High School, is an engineer at the aerospace and defense engineering firm Northrop Grumman in California. And, although he joined the firm as a systems test engineer, he leapt at the opportunity to become an alignment engineer and join the team working on the James Webb Space Telescope, which is peering back in time to capture never-before-seen images of deep space.

You can read more about his work on the telescope in a story the Excelsior is republishing from Jackson State University, Williams’ alma mater.

The 27-year-old attended Spring Valley Center for Exploration and Washington Writers’ Academy before going onto Hillside Middle School and Kalamazoo Central High School. He is the son of Wyndi Harper-Williams, a behavior specialist at Milwood Magnet School, and the grandson of Hank Harper, former principal of Lakeside School and assistant principal of South Junior High School — now Maple Street Magnet School for the Arts.

After graduating from Kalamazoo Central, he attended Jackson State University, which is an HBCU. Even though he resisted suggestions to attend an historically black college or university, he said it was a life-changing decision.

“My mom and granddad both went. They were pretty adamant it was an experience that would change my life,” Williams said. “Being a young black person going from being a minority in a country to being a majority is an experience that reshapes how you see life and yourself. I wouldn’t change anything if I had to go back and do it again.”

After college, he joined Northrop Grumman as a systems test engineer, but to join the Webb Telescope project he took the position of an alignment engineer, helping calibrate precise adjustments to the telescope and aid in its successful launch and ability to send back amazing deep-space images.

“The Webb is like the 4K Ultra HD version of the Hubble Telescope. It’s seeing back in time and is capable of showing us the formation of the earliest galaxies in the universe.”

If Intelligent life is discovered on another planet, Jackson State University may be able to boast that it played a role in that discovery, because one of its alums recently helped launch the world’s most powerful telescope — one that can peer back 13.5 billion years — well before humans populated the Earth.

The joy of being part of the team that developed the James Webb Space Telescope (JWST) sent Douglas J. Williams II, 26, over the moon, figuratively speaking. Now, he’s eagerly awaiting images of the universe that have never been seen before.

The Kalamazoo native and College of Science, Engineering and Technology alum earned his bachelor’s degree in computer engineering in 2019.

Williams lives in Los Angeles and has worked nearly three years for aerospace and defense giant Northrop Grumman, one of the prime contractors that developed the telescope. Williams is an engineer with the alignments team, which played an integral part in supporting test and on-earth mechanical deployment procedures for the Webb telescope.

‘JWST IS CONFIGURED DOWN TO THE THOUSANDTH OF AN INCH’

If any part of the telescope’s structural apparatus moved, “nine times out of 10 we were involved,” Williams said. “That’s not to say we single-handedly owned any one responsibility. After all, we worked in conjunction with 100-plus other incredible engineers.”

He added that “JWST is configured down to the thousandth of an inch, and my team used metrology (the science of measurement) to keep deployments within the necessary tolerances. We aided in JWST’s last opening on the ground and in simulating zero gravity with the offloading team. We monitored Webb daily in order to minimize internal stresses that tend to arise during earthquakes and deployment processes.”

Williams said his team also assisted in aligning Webb’s high-gain antenna to enable it to send and receive signals to and from Earth. “Being one of the new members on the team, I really appreciated getting to learn on such an impactful project.”

Williams said he first learned about space-deployed telescopes when he was a student at Kalamazoo Central High School. He wants others to explore opportunities beyond Earth.

“If my words reach any tech-savvy young brothers and sisters with a passion for tinkering and creating, I hope you give STEM a try. Don’t get me wrong, all the math courses can be daunting, but I think it’s worth it,” Williams said. “This journey absolutely has been incredible. JSU gave me the learning environment I needed to develop.”

Williams said that during his orientation at Northrop Grumman, his manager casually mentioned that the company was building a telescope. She told him he could view it on the public observation deck. “She didn’t mention it was Webb. Out of curiosity, I walked over and opened the door, and, to my surprise, Webb was staring right back at me. I pretty much spent most of my lunches going to the viewing room from then on.”

Eventually, his manager asked if he’d like to work alignments on Webb, and Williams said, “Absolutely!” He said he was beyond excited to be part of a “historic project that promises to rewrite our science textbooks.”

A few months later, Williams began working on the largest, most powerful space telescope ever built. Webb is the successor to the Hubble Telescope, whose defining feature was its ability to look at the universe through ultraviolet and visible wavelengths. In contrast, Webb sees primarily in infrared, enabling it to look back billions of years to the first light after the Big Bang.

Williams said the recent launch went so well that experts expect the telescope will have enough fuel to be operational well beyond its previously estimated 10-year lifespan.

“It was a very surreal experience — one that I was grateful to be able to share with my family on Christmas Day 2021,” which was the day of the launch.

Now that JWST has reached its final orbit in space after a month-long journey, Williams said, “I think that discovering potential life-bearing planets will be one of the greatest discoveries Webb makes. I’ve always thought that humanity was not alone in the universe, but I never considered that I would have anything to do with that discovery when the time came. I can’t wait to see what we find.”

Williams said that once Webb’s 18-hexagonal mirrors are fully calibrated he hopes astronomers will start implementing their Hycean planet research in pursuit of discovering alien life.

“Hycean planets are a type of exoplanet that are hotter than normal and are covered in oceans,” he said. “They may have conditions to support early life, and their habitable zones are larger than those of Earth-like planets. So, there might be a better chance at locating them.”

The challenge now, Williams said, is for “earthlings” to “show respect and dignity toward others regardless of race, creed, nationality, gender, sexual orientation or disability.

“It would be unfortunate for humanity to discover life on other planets without first learning how to properly treat one another on Earth.”