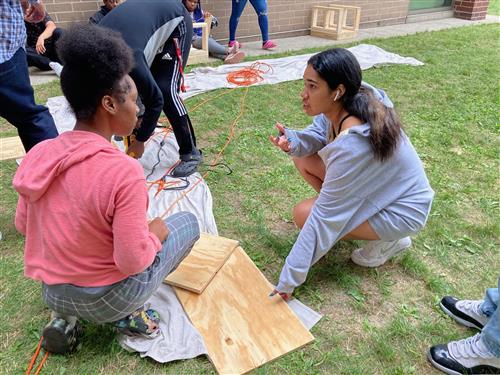 MiStem provided the materials for students to build birdhouses and doghouses, which were then sold to area businesses to raise funds to help sustain the program for next year. KPS math teachers Grace Wiesner and Bryan Anderson oversaw the project at Linden Grove.

Armani Pompey, who will be a freshman at Kalamazoo Central this fall, said, “I liked getting my hands dirty. It took me out of my comfort zone. It was an interesting experience.”

“We had one special education student who really was struggling with the content, but he has flourished with this project,” she said.

Dr. Diane Owens-Rogers, the Southwest MiStem regional director, said the doghouse program, which is in its first year, was created to support middle students in learning about construction trades careers, grade-level math content, and social and emotional learning as they worked cooperatively.

“These students participated in instruction that supported their learning of mathematics such as two- and three-dimensional geometry, measurement, and algebraic equations,”