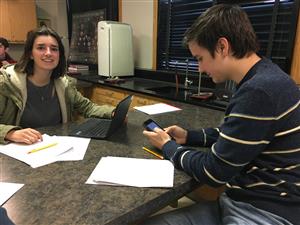 Antoinette “Anna” Puca lived in two high-school worlds: Loy Norrix and the Kalamazoo Area Math and Science Center, and both helped define her and her future.

The Loy Norrix 2020 valedictorian has divided her time between the two school environments and that is part of the reason she is enrolling this fall in the University of Michigan College of Literature, Science, and the Arts, where she hopes to pursue math or data science along with the humanities.

KAMSC helped drive her interest in math and science. There she participated in several research projects, most notably the Wearable White Cane, a vest with sensors to help people who are visually impaired detect objects and obstacles in three dimensions in their surroundings, such as low-hanging tree branches or fences. Working with Western Michigan University engineering professor Pnina Ari-Gur and her KAMSC student partner Julia Strauss, Anna helped code the vest’s mobile app, which they called The Smart Cane.

“The app uses a lot of audio instructions. We tested it to make sure the audio was saying what we thought was necessary and what would help visually impaired people recognize the obstacles,” she said. “We also had to research the different things you could run into when you’re out walking and figure out what would be the correct distances for warnings on the app.”

Anna and Julia were able to take the project to the International Intel Science and Engineering Fair, where they witnessed an impressive array of interesting and helpful projects.

“I got to see how research can help people,” Anna said. “That project was one of my best experiences in high school.”

While she enjoyed that math and science rigor at KAMSC and the opportunities it provided to do research and develop higherlevel math and computer programming skills, she is equally enthusiastic about Loy Norrix.

“I was challenged at both schools in different ways and I really liked that,” she said. “I’ve known for a while that I want a career in math and science, but Norrix helped me appreciate the humanities, so I want to continue studying foreign languages and learning about history.”

At Norrix, Anna played varsity soccer for four years and varsity basketball for three. She was a member of the National Honor Society and competed in DECA, the business club.

DECA helped her compete in another research project. She and student Chanel Wilson created a dress shirt for amputees. Through their research they found that most shirts for amputees were casualwear. Anna and Chanel created a dress shirt with Velcro behind the buttons and with adjustable sleeves to accommodate different amputations. Not only did they research and design their project, but they learned the business aspects of finding investors for inventions.

Right before schools closed because of the pandemic, the girls took their project to the state DECA competition.

She said there are a lot of opportunities through Kalamazoo Public Schools. Even if students aren’t enrolling in KAMSC, they can challenge themselves with Advanced Placement classes, dual enrollment, and Early/ Middle College, which allows students to complete a five-year high school program to simultaneously earn a high school diploma and an associate’s degree.

“People can choose the specific things that work for them,” she said. “You just have to be the one that wants to take the extra step.”

She feels lucky to have had both experiences and communities to help her map out her future. “My family, friends and teachers helped me figure out what I wanted to do,” she said.

“I liked having friends at Norrix and KAMSC, because each group challenged me in different ways. Being surrounded by people who were motivated at both schools helped keep me going. Your community is really important.”

Read about more graduates in the August Excelsior.