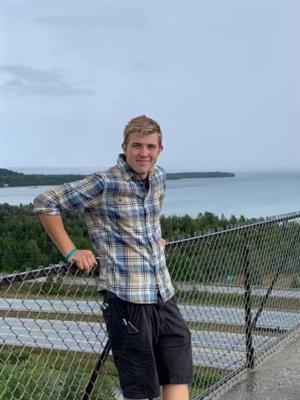 For some students, high school graduation is a big step into the unknown. But, for Robert Wheeler III his path is well defined — in part because he has been participating in virtual learning for the past two years, including the past year in the Kalamazoo Focused Learning Experience or KFLEX.

The Covid pandemic created innumerable challenges, but Wheeler, 18, who also goes by Bobby, managed to take advantage of the challenges to create a situation that allowed him to earn his diploma and work full time, developing the skills necessary to build a solid foundation in his family business.

When Covid closed down schools, Wheeler, 18, began working full time at his family’s business, Crosstown Auto and Truck Parts, and he discovered that not only did he enjoy the work but that he was good at it.

Crosstown Auto dismantles old and wrecked vehicles and sells the salvaged parts mostly to other auto and body shops across the country.

Wheeler works as a dismantler. He takes apart cars, pulling items such as motors and transmissions. He’ll also repair broken parts so they can be resold.

The company is owned by his grandfather and father Robert Wheeler Sr. and Robert Wheeler Jr. and his aunt Carmen West. The rest of his family includes mom Erin, older sister Karley, younger brother Gavin, and little sister Savannah.

He had to participate in virtual school at the end of his sophomore year and through his junior year, but his senior year he could have chosen to return to in-person learning.

“I felt like virtual was the best option for me,” he said. “I could continue to work and get hands-on experience and then balance that out with doing school at night. I think it was the best of both worlds.

“My favorite part of the job right now is being able to work and to use my hands. I just do what I do best, which is work on cars, whether tearing them apart or putting them back together. I took to it naturally and I’m really good at it.”

“It allows students incredible flexibility to be able to take a different path than traditional schooling, while still gaining a diploma through their home schools and retaining relationships with teachers and peers,” she said.

She added that Wheeler’s maturity and discipline were key to his success.

“Robert fully utilized the opportunities to connect in a virtual environment,” Briggs said. “He attended the synchronous check-ins each week, building rapport with a source of support in the program, and participated in each live session for his courses, which connected him with his peers.

“Robert’s ability and willingness to not miss one day of a live appointment and to speak in the live sessions of classes, worked so much in his favor.”

That’s not to say it wasn’t difficult and not without its downside, Wheeler said.

He would get to work at 8 a.m. His work day would end at 5 p.m. He’d go home and have something to eat and then hit the books for three or four hours each night. It was exhausting. And, it equaled an almost nonexistent social life.

“Don’t get me wrong, I have friends and what not but once Covid hit, you’re not in school seeing people every day and talking to them — especially if you’re working full time,” he said. “Your schedules are mixed up and I didn’t really keep in touch with people — and people didn’t keep in touch with me. We just lost connections.”

Wheeler is looking forward to the future and to seeing what college life brings. He plans to keep working at least part time when he goes to Western, but his focus will be on his studies, he said.

“One thing I can say my parents were big on is that school is first. Work is not a priority. This is a privilege that I am able to do it right now. My grandpa was the same way. For everyone at the shop, you can’t work for him if you don’t have your diploma.”