Take a deep breath! Celebrate the beginning of a new year with books that celebrate various kinds of new beginnings.

“Feliz New Year Ava Gabriela” by Alexandra Alessandri Ava Gabriela is visiting her extended family in Colombia for the holidays. She’s excited to take part in family traditions such as making bunuelos, but being around all her loud relatives in an unfamiliar place makes Ava shy and quiet. How will Ava find her voice before she misses out on all the New Year’s fun?

“The Day You Begin” by Jacqueline Woodson, Illustrated by Rafael Lopez There will be times when you walk into a room and no one there is quite like you. There are many reasons to feel different. It’s not easy to take those first steps into a place where nobody really knows you yet, but somehow you do it. Jacqueline Woodson’s lyrical text and Rafael López’s dazzling art reminds us that we all feel like outsiders sometimes-and how brave it is that we go forth anyway. (This book is also available in Spanish, as El Día En Que Descubres Quién Eres!) 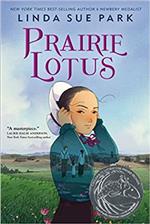 “Stepping Stones” by Lucy Kinsley Jen, a city child, moves out to the country and has to put up with her mom and her mom’s new boyfriend, as well as his kids. Suddenly part of a larger family in a new space, Jen isn’t sure there is a place for her in this different world. This graphic novel is funny and warm, but most of all, it is about starting over and learning to grow through new experiences and finding new talents.

“Prairie Lotus” by Linda Sue Park When Hanna and her father leave California for the Dakota Territory in the 1880s, they try to settle in and become part of their new community. However, Hanna is half Chinese and faces racism when she tries to enroll in school, as well as when she works in her father’s dress shop. Through a combination of resilience and help from people she grows to trust, Hanna works to make her new home a place she can thrive.

“Genesis Begins Again” by Alicia D. Williams Genesis’ entire life has been one upheaval after another. Every time she thinks her family has settled into a new place, her dad loses his job or fails to pay the rent. Not only is it hard to be in middle school and have to keep starting over, but Genesis also has a lot of self-doubt and keeps a list of things about herself that make her unlikeable. When it comes time to move again, will this be the chance for Genesis to see her good qualities as her choir teacher does, or will she still believe the negative things her father has put into head over the years?

“Becoming Muhammad Ali” by James Patterson, Kwame Alexander, and Dawud Anyabwile Told in both prose and verse, this book is the story of M u h a m m a d Ali’s childhood up until age 17 as he grew from Cassius Clay into the championship boxer he would one day become.

“Hello Crochet Friends!: Making Art, Being Mindful, Giving Back: Do What Makes You Happy” by Jonah Larson, Jennifer Larson, and Erin Harris Learning how to crochet helped 1 1 - y e a r - o l d Jonah Larson adapt to his new life after being adopted from Ethiopia. As he struggled in school, Jonah found a hobby that he loved and that helped him cope and move into a place where he could use crochet to inspire others.

“Harbor Me” by Jacqueline Woodson When six students end up in the same class, their teacher gives them a way to bond: a special time each week when they talk only to each other. Together they discover what is unique about themselves, as well as what they have in common. Jacqueline Woodson is the featured author for Kalamazoo Public Library’s 2021 Reading Together program.

“Super Fake Love Song” by David Yoon When new girl Cirrus mistakes self-described nerd Sunny Dae as the lead in a rock band, Sunny rolls with it and forms a fake band with his friends. If his lies continue, he risks losing both Cirrus and his friends.

“Don’t Ask Me Where I’m From” by Jennifer De Leon When she starts at a new school, first generation American LatinX Liliana Cruz does what it takes to fit in despite the lack of diversity at the school. When family secrets spill out and racism at school ramps up, Liliana must decide what she believes in and take a stand based on those beliefs.

“Legendborn” by Tracy Deonn Filled with mystery and an intriguingly rich magic system, Tracy Deonn’s YA contemporary fantasy offers dark allure with a modern day twist on a classic legend and a lot of Southern Black Girl Magic.