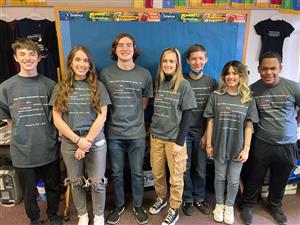 Kalamazoo Central High School graduate Antony Alvarez is certainly soft-spoken, but he’s certainly not bashful or shy when it comes to demonstrating his computer coding skills.

There he is a master. There he dominates. There his actions speak loud enough for anyone to hear.

Alvarez, 17, has in essence earned a varsity letter in computer programming at the Kalamazoo Area Math and Science Center, where computer science teacher Shannon Houtrouw says Alvarez is one of the best he’s ever seen. Houtrouw has taught him the programming languages C++ and Java, but Alvarez came in as a sophomore already knowing how to code in Python.

“I asked him how he came to learn Python and he told me that whenever he got bored in ninth grade, he would take it upon himself to learn that programming language,” Houtrouw said. “I believe this really speaks to his character. While most other students might choose to play games or watch Netflix in their leisure, Anthony takes the time to develop himself and pursue his goal of becoming a computer scientist or an engineer or both.”

Alvarez is the equivalent of the Computer Science team captain, helping lead KAMSC to winning performances in competitions at University of Michigan-Flint, Michigan State University, and the Governor’s High School Cyber Security contest. He helped lead the program to a first place finish in the American Computer Science League’s Classroom Division Contest.

His hard work and skills have earned him a QuestBridge Scholarship, which will provide a full-ride to Northwestern University in Illinois.

Alvarez is the son of Fanny Hernandez and Antonio Alvarez. He moved to Kalamazoo from the Santo Domingo, Dominican Republic, in the sixth grade when his mother earned a scholarship to pursue graduate studies at Western Michigan University.

He had to take English as a Second Language classes when he first arrived. The language barrier made it difficult to make friends and probably made him a little more shy, he said.

“I think coming to the U.S. humbled me a bit,” he said in a college essay. “Moving to the U.S. was quite a big change in my life. Suddenly, I was surrounded by people who spoke a different language and had a fairly different culture from mine.

“School was not an issue, but I had a hard time making friends. I think this also initially had the effect of me having little to no confidence in my language and writing skills, as writing in a second language, especially at the level expected at school, is rather worrisome. Yet I am still very confident in my abilities to do other school-related things.”

The one area where he has always felt confident is in his math skills.

“I think I have been good at math for as long as I can remember,” he said. “I guess it just makes sense to me more than other subjects. I like the consistency of it.”

By eighth grade he tested into the Academically Talented Youth Program in math, and then his counselor suggested he apply to KAMSC.

In addition to computer science, he said he has particularly enjoyed the higher level mathematics taught in physics with Mike Sinclair and Modhi Alshehri. He has also enjoyed the CTE Electronics & Robotics course taught by Ken Briggs and U.S. history with Eric Buckleitner at Kalamazoo Central.

Houtrouw calls Alvarez “amazing,” not just for his CS skills but for his work ethic and his personality.

“One thing I really appreciate about Anthony is that even though he is such an academic star, he remains quite humble about his accomplishments,” Houtrouw said. “He is not just another computer nerd. He is a wonderful young man.”

Alvarez said perhaps he does “undersell” himself sometimes.

“I’m not sure. I’ve always been a bit bashful, I think. But not in math or programming. I’m confident in those areas.I get really excited about those so it’s kind of easy to lose myself in those areas. I guess I also like mastering stuff. It’s getting through things and knowing I’m good at something and that feels great.”