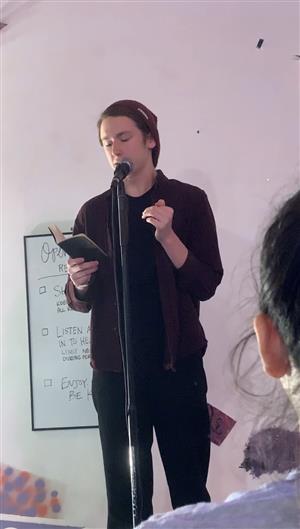 Cormac Roth has the demeanor of a laid-back gamer — and the drive of a top-notch student, who also happens to be an accomplished musician, computer geek and slam poet.

Cormac is the valedictorian of the Kalamazoo Central Class of 2020 and a graduate of the Kalamazoo Area Math and Science Center. He was named a Kalamazoo County Excellence in Education winner and an Outstanding Senior in Education For Employment. In the fall, he’ll be attending the University of Denver where he plans to double major in game design and oboe.

“There are not too many programs around the country that do game design, which is one of my intended majors,” he said. “While I was narrowing my search I was also looking for a strong music program. I was blown away by their facilities for music. It opened up the possibility of the double major.”

His combination of interests is not that unusual, he said. He has always enjoyed gaming with friends and for him good game design requires great programming, graphics, storytelling and music.

Much of his focus at KAMSC has been on computer programming, and through a scholarship from the Jack Kent Cooke Foundation, he attended a game design course at Harvard University during the summer before his sophomore year. He also found an outlet for his interest in programming through the Education For Employment electronics and robotics class at KC, which allowed him to work on lighting projects and an underwater robot.

“It was a lot of hands-on classroom work where you can work at your own pace. There’s not a lot of added stress. You just come in and work on cool stuff and Mr. (Ken) Briggs is super fantastic.”

Cormac’s interest in music predates his interest in computer science and game design. An oboist, he counts his years with the Kalamazoo Junior Symphony Orchestra as the highlight of his high school career. He had to juggle his course load at KAMSC and Central with practicing and rehearsals but says it was worth it.

“Nothing comes close to the rush you feel when you finish a concert and you know it was a really good one,” Cormac said. “Being a part of a group with so many talented people was crazy. It was awesome to make music with them.”

His other extracurricular activities have included volunteering with Peace House, an Eastside nonprofit that provides afterschool programs for neighborhood children, playing travel soccer, and serving as a youth soccer referee. He also performs slam poetry with the Fire Arts Collective.

He’s enjoyed all of those activities and the friends that he’s made, but he has no qualms about leaving the familiar behind next fall.

“I’m ready to go out and see new people, to do new things, to go out there and have new experiences.”

Read about more 2020 graduates in the August Excelsior.