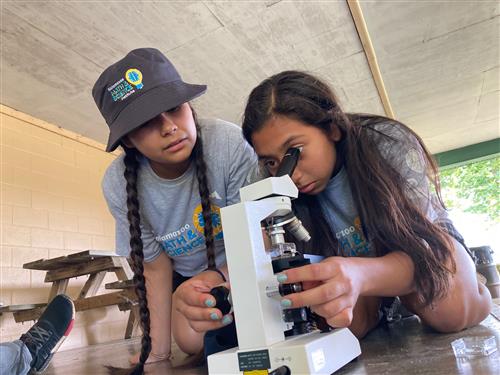 Students signed up for the Kalamazoo Public Schools Math and Science Institute for a number of reasons. They liked technology. They wanted to know more about animals. Their moms made them do it.

But no matter why they enrolled in the new KPS summer science program for rising ninth graders, all agreed that the four-week hands-on learning experience was interesting and worth part of their summer.

“I was very intrigued by the orientation. It was cool,” said Joshua Lent, who will be attending Kalamazoo Central in the fall. “I also liked the partnership with the Kalamazoo Nature Center and that I could earn a half credit of science. It seemed like a great opportunity.”

Perhaps what Lent didn’t expect was that it would be so much fun. He enjoyed the field trip to River Oaks Park in Galesburg, where students and staff took water samples and collected samples of invertebrates. He also liked the tech focus put on drones and using computer-aided design work to create bug catchers.

Kristen Miller, the new coordinator of math and science for KPS, said having fun was part of the equation when the program was being designed.

“There are a lot of hands-on activities,” Miller said. “We’re working on bridging gaps and making that transition from middle school to high school learning. Students worked on note taking and high school study skills — all of which were embedded in the hands-on work.”

KMSI was piloted last year as a one-week program for students attending summer school at Hillside Middle School. This year it was opened to any incoming freshman, expanded from one week to four weeks, and students were given the opportunity to earn high school credit. The program was held at Linden Grove Middle School.

“We saw a lot of interest from the students who participated last year, and there’s just growing interest in the STEM fields,” said MIller, who was a longtime teacher at Edison Academy and a lead math teacher for the district before being named to her new position. “We wanted to continue to build off of that excitement for the students.”

Plus, she said, while middle school students have the chance to earn high school credit in subject areas such as math and art, there has not been similar opportunities in science.

This year’s program explored issues of water quality, with a focus on the health of the Kalamazoo River.

“We are localizing it so it is meaningful to the students,” Miller said. In the first few weeks, students learned about some of the wildlife around the river.

That was a highlight for Heidi Cruz-Ramirez, who said she is interested in research related to animals. She enjoyed the classes where the students interacted with a box turtle and a milk snake and learned what the animals like to eat and what they need to have safe habitats.

“Science is one of my favorite subjects,” said Cruz-Ramirez, who will be attending Loy Norrix High School in the fall. “This is a good experience and a good opportunity to get that extra credit in science.”

Students used Tinkercad, a free app for 3D design, to modify bug catchers to capture microorganisms in the water, with some of the designs being fabricated with 3D printers. They went to Morrow Pond at River Oaks Park to collect specimens with the bug catchers, both off a dock and from canoes.

Students also experimented with drones and Sphero robots to collect more data about habitats and species around the river. Students analyzed their data and in their final week, shared their findings with the staff and the other students.

“We gave them multiple ways and tools to collect data and to look at the water quality,” Miller said. “We really want students to think about, ‘What could I do if I continue my interest in science or engineering or mathematics?’”

“We just want to figure out how we can expand this program. We’d love to have a waiting list,” she said. “We want to offer it to as many students as we can so they have the opportunity to explore these STEM careers.”

One thing that might help is having the students promote the program.

Kameron Bean, who will be attending Kalamazoo Central as a freshman, said, “Honestly, my mom made me sign up.” But he enjoyed KMSI, especially learning about the animals and their habitats around the river. “I also just wanted to get out of the house and to get ahead in high school. But kids this age should do it. You get to meet a lot of new people and it was fun.”