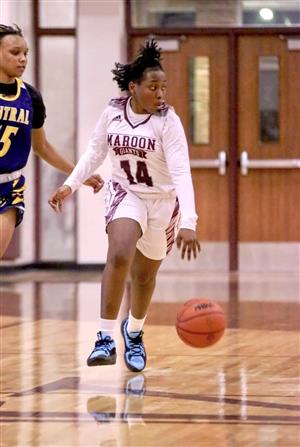 That’s all there is to it.

Kalamazoo Central High School graduate Ayanda Ndlovu, 17, said that was the key to high school — and she finds that’s the key to most of what happens in life.

Ask her about her activities in high school and with a smile, she says, “I was just a basketball player.”

She’s been playing forever. When she came to Central, she worked her way through freshman basketball and junior varsity. Then, after the frustration of a season shortened by Covid in her junior year, she tried out for the varsity team. Making varsity was her one goal for high school.

And, she was cut.

She said the coaches came up after tryouts and offered her the chance to be a team manager.

“I was kind of numb. I had played since I was a freshman and I didn’t think I’d get cut, but I knew there were things I had to work on,” Ndlovu said. “Coach P (Jason Plunkett) told me to go home and think about it. I texted Coach that night and said, ‘Yeah, I’m ready to be a team manager.’”

Still, she did wonder why she got cut, so she asked Assistant Coaches Nelly Smith and Alexis Buchanan: What could she do to get better?

“They gave me different things,” she said. “While the team was practicing, I’d be on the other side of the gym working on becoming a more confident shooter and dribbling. All of the stuff they said.”

Grit and grind. Even when you’ve been cut.

She was there for every practice, helping the team run drills, assisting the coaches.

“I was actually OK with being a manager,” Ndlovu said. “It was the same girls I played with since I entered high school. They’re still my best friends. I wanted to stay by their side. It was our last year. I had to be there for them. We all had love for each other. I just wanted everybody to succeed.”

In February, the team went on a bonding field trip to watch the Western Michigan University Broncos take on the Ohio University Bobcats women’s basketball team.

“We all got up to get snacks at halftime, and Coach P stopped me for a sec and he told me that he’s putting me back on the team. It’s only for certain games and he may or may not play me,” she said. “I didn’t get on the team and every other girl did. I didn’t expect to get monster minutes but I told him that I’d work for every second I got.”

She ran and told her friends. “We were all screaming and happy. It was a sweet moment.”

Ndlovu played two or three games for the varsity team, including scoring several baskets during the crosstown rivalry game between KC and Loy Norrix.

“Everything I get, I have to work for. There are no handouts in life,” she said. “I have to approach everything with grit and grind because that’s the only way I know how to. I never got anything just because.”

Ndlovu is the daughter Teresa Swindle and Frederick Okes, but her mother died of breast cancer when Ndlovu was 3, and she was raised by her maternal aunt Mildred Morgan. In the fall, Ndlovu will attend Ferris State University to study business and sports administration.

She said was always a good student but a “challenging” student in terms of behavior. She is grateful to people like Kalamazoo Central Assistant Principal Ajamian Gardner and teacher aide Deborah Yarbrough.

“They took time to get to know me personally in school and outside of school,” she said. “They showed me how to get better and I felt like I owed it to them to do better for myself. I did turn my behavior around a lot.”

She said that behavior-wise, she “probably” gave her aunt a hard time too.

“I grew up angry. I think my mom’s death affected me. I didn’t understand why it had happened. She tried to figure out a lot of things. She pulled me aside, took me to counseling, got me involved in a lot of fun activities to calm me down and wear me out. She’s the only mom I really knew. It was a roller coaster but I wouldn’t change it.

“I got my grit and grind from her. She pushed me to do my best. Whatever I wanted at home, I had to earn it. She taught me a lot about how to get stuff for myself and to never look for handouts.”

Her advice to other high school students:

Try not not to make poor choices.

Don’t just choose the fun crowd, choose the friends who will be there for you when you’re down.

“Do what you wanted to do when you first woke up in the morning. You don’t want to wake up the next day with any regrets.”